Comment on The Telegraph’s ‘Overweight and proud, but is the game finally up for ‘fat-fluencers’?’ 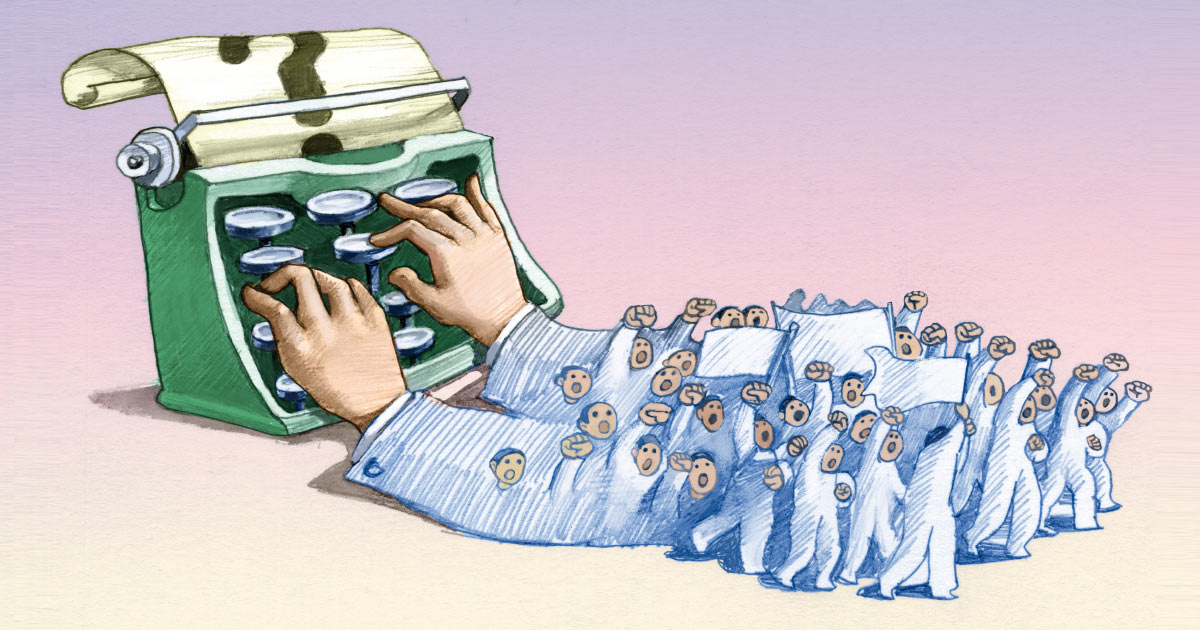 Three prominent fat activists were recently interviewed by a reporter from The Telegraph newspaper, a conservative-leaning daily broadsheet here in the UK (conservative with a small c though some would say with a capital C). Let me introduce you to these three inspiring women:

Amy Pence-Brown is the woman who stood blindfolded in a bikini, in a market place in Boise, Idaho, with a sign at her feet asking people who’ve ever suffered self-esteem issues and who believe that all bodies are worthy, to please draw a heart on her body (with washable marker pens). The performance went viral. Amy also makes fabulous art – she has an amazing series of side-by-side photos – one of Hilda (the vintage pin-up) and one of Amy striking the same pose. And on top of that, she runs Radcamp: A Body Positive Boot Camp for Feminist Teens. How cool is that?

Sofie Hagen is a Danish comedian living in the UK, who has recently published her book Happy Fat: Taking up Space in a World That Wants to Shrink You. Sofie uses humour, wit and hard-hitting realism to draw awareness to the injustice of fatphobia.

There is also a fourth person I want to mention. Before reading the article I’d never heard of her. I love finding out about new people (well, new to me) blazing the trail towards freedom and respect for all bodies. Her name is Leanda Lewis. You can check her Instagram out here.

Apart from being courageous feminist fat activists, these women appear to have something else in common: they were duped by the reporter about the true aims of the article. Under the pretence of it being a neutral piece about the rise of fat activism on social media (and promotion for Sofie’s book), the article was really a polemic, seeking to undermine and belittle rather than uplift this social justice movement.

I’m not linking to the article because I do not want to send more traffic there. Instead, I’d rather send traffic to Amy’s, Sofie’s, Linda’s and Leanda’s communication channels (🖕 to the Telegraph).

So, what’s my problem with the article?

Well, pretty much everything. But that’s not very helpful, so here’s a critical analysis.

First off, the article is in the Health section. This is important. If it were really about fat activism, its proper location would be in the Politics section – because social justice IS political. Instead, placing it in the Health section is subtly (or not so subtly) adding fuel to the false claim that fat activists are ‘completely unconcerned’ with health.

Anyone who has done even a tiny bit of research into the politics of fatness, or anyone seeking to uplift the fat activist movement would not be using the word ‘overweight.’ This term, henceforth known as ‘the other o-word‘ is pathologising of bodies that do not fit into the ‘healthy weight’ BMI category. It reinforces the idea that health comes in certain sizes and we all know that this is nonsense. Thin people can be unhealthy, ill and diseased. Fat people can be healthy.

Asking the question ‘is the game finally up for fat-fluencers’ is disingenuous at best. What game is she talking about? This is about people’s lives. This is about mental health. This is about fat people staying indoors because they fear the taunts and jibes they’ll get by literally walking outside their front door. It’s about fat people not being given jobs, promotions, or proper care at the doctor’s office. This is not a game. Perhaps she’s talking about the rise of fat people being so brazen as to actually live their lives their way and sharing that on social media. You know, fat people documenting their radical acts of dressing in fabulous clothes and taking photos of themselves daring to eat ice-cream in public or to go to the beach with their kids – like thinner people do every day without thinking about it. This is also not a game. It’s brave! Have you any idea how much trolling these courageous souls endure?

#fatspo is helping fat people give themselves permission to live life unapologetically. That is not a game. It’s social justice. It’s mental health. It’s empowerment.

And – what is a ‘fat-fluencer’? Someone who influences people to become fat? That is not a fat activist’s mission! A fat activist wants fat people to have the same rights and opportunities as thin people. Fat activists want to extinguish the marginalisation of fat people from all spheres of life; they want fat-shaming to be a hate crime and for the world to stop wanting to eradicate them. If this is what a ‘fat-fluencer’ is, then fine, but I somehow doubt that that was her meaning when she used the term.

The last annoying thing about the title is the reference to ‘inconvenient truths.’ I’m afraid the reporter is mixing up the truth with scaremongering. Maybe I’m being a teeny tiny bit unfair on her. There are without a doubt elevated risks associated with being in a higher weight body. That is true. But what’s not clear is why this is or whether in fact, it’s to do with the adipose tissue itself, or something else. You can read my analysis of this latest news she’s referring to here. There’s also the problem with her mixing up causation and correlation and I’ll address that next.

I would say the ‘inconvenient truths’ for the medical, media and dieting (aka wellness/ detox) industries are that there is ample and robust evidence that intentional weight loss is not safe or sustainable for the great majority of people who try it. In fact, people tend to gain weight through their attempts at it.

Mixing up causation and correlation

Throughout the piece, the reporter gives the impression that the elevated risk to people in higher weight bodies getting diabetes, heart failure and cancer is evidence that it is ‘dangerous’ to be in a higher weight body. There is undoubtedly a correlation with being in a higher weight body and certain health conditions. Correlation means there’s a relationship between two or more things. It does not mean that the weight itself is, without doubt, the cause of the health conditions – and this is such an important thing to understand. Linda Bacon goes into this in some detail in her books and Fiona Willer of Health Not Diets and Unpacking Weight Science also does a fabulous job in myriad ways. I have a go at it here too.

Fat activism is not about health. It’s about justice. It’s an absolute falsehood though to claim that the whole movement is ‘completely unconcerned’ with health. We do advocate that it’s fine to be fat, because people are allowed to exist peacefully in the bodies they have; they’re under no obligation to pursue health if that’s not something they want to do, and – there is no conclusive evidence that being fat is unhealthy per se. It’s also important to highlight that health is not only about our behaviours. It’s also to a large degree about the genetic lottery and social privilege we happen to find ourselves with.

I have never seen any fat activist claim that there is no health risk for fat people. We accept the correlations! But they still don’t equal causation no matter how many times they are evidenced. We are also saying that there are other possible explanations for the elevated risk, which I explain in this blog.

Using the word ‘say’ here is dismissive. It’s not simply a claim of victimisation. The prejudice faced by fat people is real. It has been researched and documented.

If you’re American or perhaps Australian, ‘raucous trumpeting’ might be viewed in a positive light. But remember, The Telegraph is a conservative, reactionary, right-leaning newspaper. Their readership is of the type that doesn’t appreciate raucousness of any kind. ‘Trumpeting’ adds insult to injury. It’s seen to be in poor taste. Bad manners. Uncouth. Not to be taken seriously.

Later on in the article, she further dismisses fat activists and Sofie Hagen for their criticism of the Cancer Research UK campaign last year. She uses the words ‘hit back at health warnings’ ‘derogatory’ and ‘pointing out’ to belittle the valid complaints we had about the campaign. Let me remind you that Cancer Research UK did not simply ‘point out’ that being fat increases the risk of cancer. The campaign was worded: ‘O-word is a CAUSE of cancer.’ It was inaccurate and inflammatory. I wrote about that here.

On the one hand, for most of the article she’s talking about health and is implying that fat activism is glorifying the o-word and letting fat people off the hook of spending their lives trying to become thin (and healthy, by implication). On the other, she’s talking about self-love. They are not the same thing.

When it comes to improving health outcomes, it’s health-promoting behaviours that are important, rather than weight outcomes. (It also helps to not be poor and to have been born with ‘good’ genes…). There is no evidence to suggest that adipose tissue in and of itself is a health risk. I go into this in some detail here and here.

When it comes to self-love, living unapologetically for who we are, what our bodies look like, or their health status is key. Someone who chooses not to prioritise health is as worthy of his/her/their own love, care and acceptance as someone who does. Dr Laurie of The Two Fat Professors wrote a brilliant piece about this.

Misses the point of fat activism

For someone who said this would be a neutral article about fat activism and its rise on social media, she has missed the point

and used this instead to make her own point that fat activists promote poor health. This is probably most clearly evidenced in a question she asked Sofie Hagen that wasn’t published in the article: ‘So if you had a child, would you not protect it from the o-word?’

If you’d like to make a complaint about this article, please do so here. And if you’re genuinely interested in learning more about fat activism, in addition to the people above, you can also follow: Ragen Chastain, Two Fat Professors, Your Fat Friend, Virgie Tovar, SJ Thompson and Be Nourished, just to get you going.😍.