A 6-week online course for some extra support. 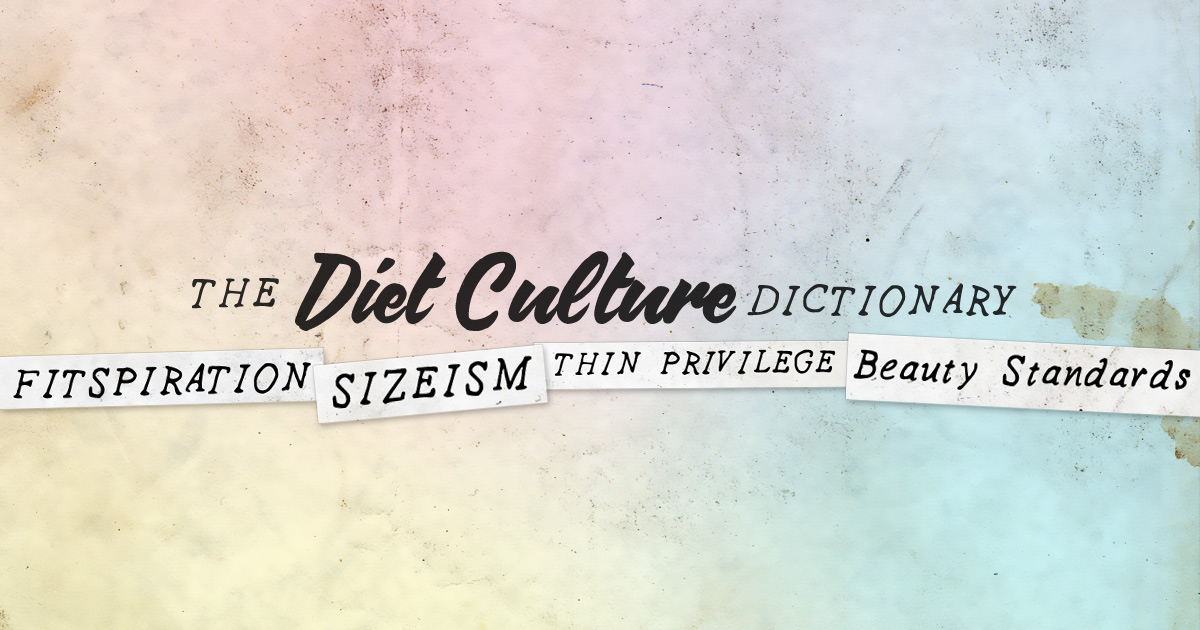 As you educate yourself around the politics of body image and diet culture, you’ll come across words that you might not have encountered before. Here’s a handy glossary to introduce you to these new ideas.

This is a work in progress. I will continue to add words and refine definitions. I invite you to be a part of this project and welcome suggestions, tweaks and hashtags in the comments.

This refers to the socially constructed norm around what is considered desirable in a woman’s appearance. Beauty standards vary from culture to culture, and over time. Use the hashtag #effyourbeautystandards when you want to draw attention to body acceptance, or to point out others’ criticisms of people’s appearance.

This is a movement that fosters kindness, acceptance and respect towards all bodies, not just fat ones! This isn’t about trying to change one’s body shape, but about accepting the one you’re in, and treating it with care and respect. It’s about building self-worth from the inside and rejecting the idea that self-worth has anything to do with body size. True body positivity is also about centring marginalised bodies in conversation and policy-making.

Diet Culture is a system of beliefs, practices and behaviours humans have created based on the ideology that being thin is morally and absolutely good, and being fat is morally and absolutely bad. It impresses upon the population the idea that if you’re fat, it’s a personal failing on your part, that you don’t care about yourself, you’re unhealthy, lazy and don’t have your shit together, whereas if you’re slender, you’re self-disciplined, organised, trustworthy, reliable, fit and healthy. Diet culture involves restrictive eating, moralising food (as good or bad) and exercise in the pursuit of thinness rather than health and enjoyment, though often under the guise of health.

Diet Mentality is based on the erroneous beliefs that:

Diet Mentality fosters all-or-nothing, black-or-white thinking around food and/or exercise: one cookie and you’ve ‘blown it;’ exercise isn’t worth doing if it doesn’t lead to weight loss/keep you thin’. It encourages ‘starting over’ with your restrictive regime when you’ve ‘had a slip’ or a ‘blow out.’

Diet Mentality encourages judging food (and thereby yourself for having consumed it) as good or bad; healthy or unhealthy – which perpetuates the diet-binge-repent-repeat cycle.

Essentially, Fatphobia is the fear of becoming or being fat. It is a result of the emphasis on the perceived perils of obesity, and the idealisation and relentless pursuit of an unrealistic body shape.

Fatphobes will often give their unasked for opinion about the fat person’s body or choice of food. They engage in fat shaming – judging the fat person’s character because of the size of his/her body. Fatphobes consider fat people fair game for humiliation, often seeking out opportunities to do this by trolling.

This is the blatant, unkind, often cruel, insulting, judgemental language of fatphobes towards large bodied people. We see it from online trolls, doctors, people on the street… we see it on TV, movies – both fictional and real. We see it in the political arena too!

Fat people also fat-shame themselves – and this is because they too have internalised fatphobia.

Like Thinspiration, Fitspiration uses messages and/or images as motivation to get and stay fit. Quotes like ‘Excuses don’t burn calories’ would be one rather chilling example which encourages people to override messages their bodies may be giving them. Fitspirational messages encourage exercising no matter what, competing with/ beating other people to the finish line, shaming people for stopping or taking a break – and more.

Coined by Fiona Sutherland of The Mindful Dietitian, sport sanctioned diet culture refers to the reasons sports people give for engaging in diet culture, namely, to manipulate their body’s composition in an attempt to improve performance.

Thin Privilege is the privilege that thin people experience – most of the time, without even knowing it. Thin(ner) people are more accepted socially, are treated with greater respect by doctors, are not the butt of jokes due to their size, get promoted more frequently, and are preferred at interview over fat people (with the same qualifications and experience).

This is the same as fat-shaming – only it’s towards thin people. Thin women (in particular, but men too) may be teased or insulted about not having enough ‘meat’ on their bones, shopping for clothes in the kiddies department, or begged to ‘eat something before you completely fade away!’ Naturally thin women are often made to feel inadequate – because they didn’t work hard to have the body shape/size they have! They can ‘eat anything and stay thin – bitch!’

Ways to motivate oneself to get/keep thin via ‘inspirational’ quotes and/images. Kate Moss’s infamous quote ‘nothing tastes as good as skinny feels’ would be one such example. With the explosion in popularity of social media these messages spread like wildfire. Thinspirational messages promote: restriction in amounts and/or types of foods; moralising food; valuing thinness over more or less anything else (including enjoyment of food and one’s body as it is) etc. (Definitely not linking any hashtags – when I did the research I was in tears.)

This is a preference for either higher weight bodies or lower weight bodies. Bias can be very subtle! Test yours here. All humans have biases! It’s normal. We can work on this because we have amazing prefrontal cortices! Weight bias can be harmful – it increases the risk of eating disorders, decreases the likelihood of higher weight people seeking medical attention and decreases doctors’ efficacy in treating patients.

This is the discrimination that people are subjected to because of their size.

A large bodied person overall gets different treatment from a smaller bodied person. Weight is almost always brought up as a solution, when it isn’t always the solution – most often not! The fatphobic attitude of many doctors, makes it difficult for fat people to seek medical treatment when they need it.

An article in the Telegraph reports that around half of British employers are unlikely to employ a fat person, because they’re perceived to be less productive, less able to play a ‘full role’ in a business and may cost the business money since it could be required to make extra accommodations for obese staff.  This is more so for women than it is for men, as you can read in another fascinating study here.

Which other words could be included? Do you have any refinements to suggest? Please tell me in the comments.