The O-Word Is the Second Preventable Cause of Cancer After Smoking. Is It True? Is It Helpful? 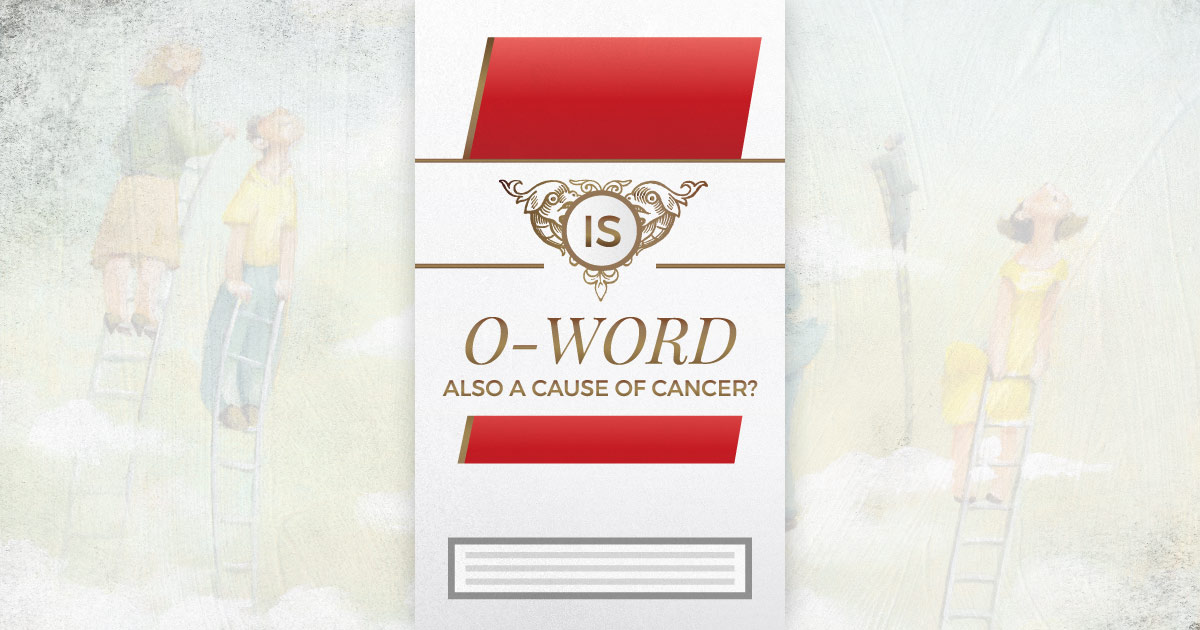 Cancer Research UK is in the news again with another of their stigmatising campaigns.  Last year they launched a national campaign on the connection between ‘obesity’ and cancer. Billboards all over the country featured a game of hangman. Remember this? 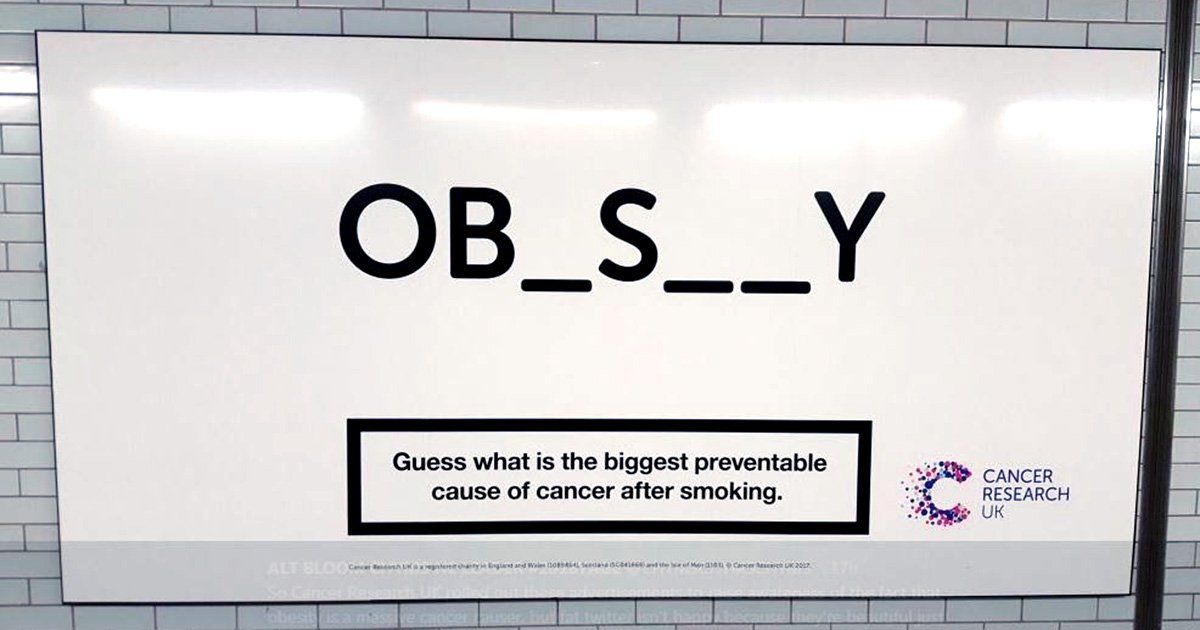 This year, the campaign is drawing attention to the claim that the o-word is the second preventable cause of cancer, after smoking. 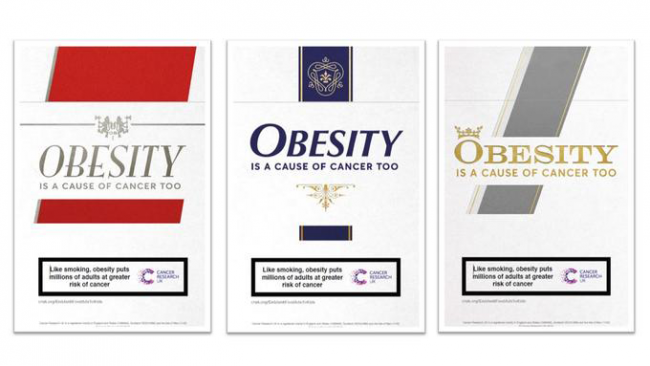 Not surprisingly, their campaigns have caused a stir. Some people think these are simply ‘the facts’ and need to be publicised so that people can take action to protect their health. Others are calling out CR-UK for fat-shaming and increasing the stigmatisation of people in larger bodies.

There are several important questions to ask:

Before I get going, you may have noticed that I’m using ‘the o-word’ instead of ‘obesity’. I’d like to explain that. I’m doing this because that word medicalises people of certain sizes as a health problem to be solved, based purely on their BMI (another problematic issue I won’t go into here). I prefer to say ‘in a large/ heavy body’ or ‘at the higher end of the weight spectrum’ which are more descriptive and not stigmatising. If you’re interested, you can read this short primer on Dismantling Stigma by Marci Evans.

Here are the questions which I believe are worth addressing to make sense of this campaign.

Is it true that the o-word causes cancer?

Cancer Research UK’s website and advertisements proclaim that the o-word is a cause of cancer. To state that anything causes anything else, you need to be certain of a cause-effect relationship. Both cancer and the o-word are complex issues – and the studies that are being used to make this claim are mostly observational. As I understand it, the randomised controlled trials (RCT) are done on animals, not humans, which is understandable – it would be impossible to do RCTs with humans to establish this relationship, because of the complexity of both the o-word and cancer. It’s interesting to me that the US National Cancer Institute website on the link between cancer and the o-word states:

‘Nearly all of the evidence linking [the o-word] to cancer risk comes from large cohort studies, a type of observational study. However, data from observational studies can be difficult to interpret and cannot definitively establish that [the o-word] causes cancer. That is because ‘obese’ or ‘overweight’ people may differ from lean people in ways other than their body fat, and it is possible that these other differences—rather than their body fat—are what explains their different cancer risk.’ [My emphasis and I added quotation marks around the words ‘obese’ and ‘overweight’.]

For sure there’s a correlation between the o-word and cancer, but correlation and causation are not the same things. CR-UK’s campaign is therefore factually incorrect and misleading.

Scientists are trying to understand the mechanisms of this correlation and they do have some theories about it. I hope (though sadly doubt) that they are also exploring whether weight stigma and weight cycling (yo-yo dieting) might increase the risk of developing cancer (as they have been found to increase risks of other diseases).

What risk does a person on the higher end of the weight spectrum carry in the development of cancer?

According to a 2016 report by the International Agency for Research on Cancer (IARC), Body Fatness and Cancer, 9% of cancers are associated with the o-word. This means that 91% are not. (Thanks to Fiona Willer for this information.)

What’s also important to consider is by how much the o-word increases the risk. When it comes to risk, it’s important to understand two things. Relative risk is how much more likely it is that a heavier person will get cancer compared to a thin person. Absolute risk is looking at how common that cancer is in the overall population. If the absolute risk is small, then even a large increase in relative risk might not make a lot of difference to the overall risk for a heavier person. (Thanks to The Rooted Project for this explanation.) The cancers with the greatest link to the o-word are oesophageal and uterine cancers. The report by the IARC mentioned above only looked at this in relation to people with a BMI over 40. So remember to take that into consideration too when you’re thinking about this! If you fall into this category and have consistent reflux issues, or menstrual/ pelvic issues then please do go and get checked out and insist on tests.

I don’t know about you, but I’m a bit confused as to why Cancer Research UK would put so much energy into fearmongering about the o-word when a) only 9% of cancers are linked to people on the higher end of the weight spectrum, and b) that the research that has established this connection only considered people with a BMI of over 40. In 2017, around 4% of the UK population had a BMI of 40 or greater. 4%! This research is not saying anything about increased risk to anyone under a BMI of 40! It’s interesting to note that a well-known dieting company beginning with the letter S, has raised over £14 million for CR-UK since 2013. I wonder how much these dieting companies are gaining from CR-UK’s fearmongering?

Wouldn’t it be money better spent, focusing on the cancers that the majority of people get?

If it is true, then what?

Let’s assume it does turn out to be true that the adiposity itself is a cause of cancer. Then what? How do we reliably and safely turn people in larger bodies into people in slimmer bodies, permanently?

CR-UK say that the o-word is the second most treatable cause of cancer. But is this true? How treatable is it? Research on the effectiveness of intentional weight loss shows that it’s unachievable for most people (>80%) to maintain their weight loss over the long term. Many dieters (up to two thirds) regain more weight than their starting weight. Dieting is, in fact, a consistent predictor of future weight gain.

As well as this, research on the benefits of weight loss is mostly unreliable because of the unacknowledged assumption that it is the weight loss itself that provides the measured improvements in health markers, rather than the behaviours one engages in when attempting weight loss – namely more exercise and greater quantities of nutrient-dense and fibre-rich foods. Also, as per Fiona Willer, it’s important to note that much of the research that concludes that weight loss achieves positive health effects is actually based on a comparison between fat people and people who are already thin, not on people who are fat compared with people who used to be fat and are now thin. The latter cohort (formerly fat) doesn’t actually exist in measurable numbers, so it is a huge logical leap to say that “because we see these differences in fat people and thin people, fat people should try to become thin.”

There is research to show that health markers improve with health-promoting behaviours REGARDLESS of whether or not the person lost weight. Weight loss is not a behaviour. It’s an outcome.

The assumption is that controlling weight is a simple matter of calories in vs calories out. This is a very simplistic approach to a very complex issue. (Click on this link to see a really interesting interactive map of the complexities of body weight). Individual behaviour may have less to do with a person’s weight than other factors, for example: genetics, socio-economic factors, weight stigma, stress, environmental factors, illness, trauma and so much more.

Is this campaign likely to help people at the higher end of the weight spectrum?

What would be more helpful?

INSTEAD, let’s work together to:

I hope that this exploration has been helpful to you. Please do join the voices of dissent regarding this campaign, on Cancer Research UK’s Facebook Page, or on Twitter and please sign and share this petition to get this campaign stopped before it causes any more harm. Also, if you’re commenting on social media please use #SupportNotStigma and #WellBeingOverWeight.

P.S. Here are some other great articles on this topic: