Triggers Don’t Cause Your Overeating 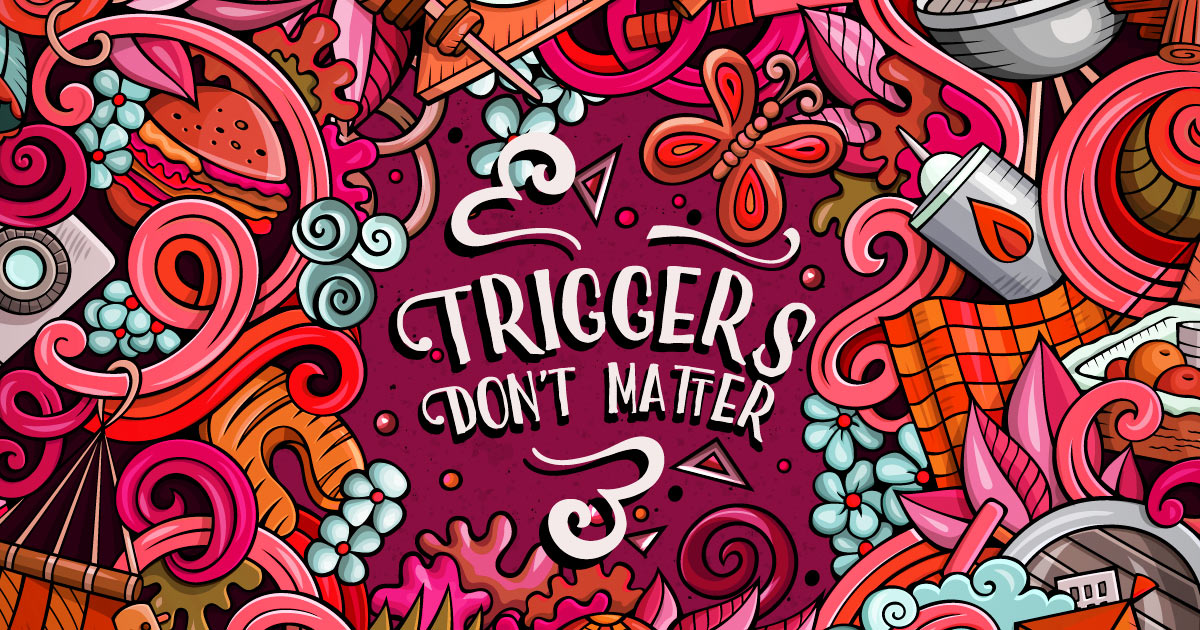 I can understand if it’s confusing to hear that triggers don’t cause your overeating. I’ve heard the advice given so many times, that you need to find and resolve the triggers of your overeating or binge eating before you can change the behaviour.

To start with, there are thousands of potential triggers. Here’s just a small sample:

Believing that you have to have your whole life worked out before you can change your eating behaviour is a terrifying prospect!  And it’s completely untrue! We can be peaceful eaters, and still have messy aspects to our lives! Thankfully. I’m an example!

When I say triggers don’t matter, I don’t mean to discount what is happening in your life. Of course, not. You and your life absolutely matter! What I am saying is that you don’t have to figure out what the triggers are and resolve them, in order to eat peacefully.

Urges are common to all triggers

If you think about it – it isn’t the triggers themselves that ‘make’ you overeat – it’s the unpleasant experience of an urge! You eat, because you want that feeling to go away. It can seem unbearable. It’s a feeling that can be so strong, it’s overwhelming- and it can make you panic, and feel powerless over your actions.

So what is an urge?

What happens is that your brain creates a neural pathway, and with repetition, it is reinforced.

This is a simple understanding of what happens:

Your triggers cause the urge to happen, but triggers themselves don’t cause the overeating

What’s helpful to know, is that the urge is only present because you have created a conditioned response.

All is not lost, and you’re not doomed to a life of overeating and hanging out at the buffet table.

The good news is that the brain is neuroplastic! This means that it can and does change.

Here is a shortened version of a tool I find helpful when I’m working with clients to help them ‘be with’ their urges:

See the urge as a jumpy puppy. If you give the puppy your attention, it will keep jumping up on you, leaving muddy paw prints on your new white trousers. Just as it’s a bit annoying to deal with a jumping puppy until it learns not to jump on you every time you walk in the door, you can treat urges in the same way.

Your urges will be triggered. Expect this to happen.

It will require you to remind yourself ‘this is an urge.‘ It’s nothing to worry about. The urge will produce feelings: anxiety, frustration, intense discomfort… so expect these too.

The most powerful thing you can do, is to allow the urge to play itself out, as you would with a tantruming child. If you pay the child a lot of attention, try to reason with her, distract her, shout at her, or argue with her, she’ll just scream louder and louder.

But, if you sit quietly, patiently, knowing full well that this will pass, it will. You can simply observe it, without getting tied up in it.

Essentially what you’re doing is breaking the loop between the cue (the urge) and the routine (the binge/overeating). If you do that enough times, the urges will lessen enormously.

And maybe even stop altogether. Though, every now and again the urge will likely be triggered again… no problem… you know what to do… allow it to play itself out, as calmly as possible.

You absolutely must feed yourself when you’re hungry! That is one urge that you cannot surf successfully, if you want to have a peaceful relationship with your body and food. The biological drive for food will always win, and in fact, food restriction – be it mental or physical, is a major reason for binge eating.

Also, it’s vitally important that you give yourself permission to eat what you want. If you use the ‘surf the urge’ tool to deprive yourself of foods you believe are unhealthy, fattening, or that you think you have no control over, then this won’t work either! This is the mental restriction I alluded to above. A part of this whole picture is to make peace with ‘trigger foods’ – the foods you fear.

The Gift Beyond Your Triggers

and What are Your Points of Vulnerablity?